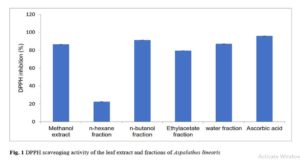 Aim: The design of plastic films imbued with some self-disinfection property would be an advantage in reducing environmental pollution and the spread of diseases. This study aimed at investigating the suitability of antioxidants-rich Aspalathus linearis (Rooibos tea) extracts for synthesis of silver nanoparticles with suitable physical properties for incorporation into a plastic matrix, in order to create a self-disinfecting film. Methods: Rooibos tea was extracted with methanol and antioxidants-rich fractions were identified by 1, 1-diphenyl-2-picryl-hydrazyl (DPPH) antioxidant assay, and then used in reduction of silver nitrate to prepare silver nanoparticles. The nanoparticles were characterized by photon correlation spectroscopy and atomic force microscopy, and their antimicrobial activities were tested in vitro against Staphylococcus aureus (S. aureus), Bacillus subtilis (B. Subtilis), Salmonella typhi (S. typhi) and Escherichia. Coli (E. coli). The most bioactive formula was incorporated into polymethylmethacrylate before polymerization. The self-disinfecting activities of the composites were tested in vitro using S. aureus and E coli. Results: The fractions gave high antioxidant activities and the reduction of silver nitrate resulted in silver nanoparticles of very low polydispersity values (<0.3) and excellent antimicrobial activities (except with Candida albicans).  The optimized film (containing 4ml of the nanosolution) inhibited microbial growth for up to 48 hrs after exposure to air for 60-90 min, whereas heavy microbial growth occurred in the control sample. Conclusion: Being edible and non-toxic, Rooibos can be used in synthesizing nanosilver with properties suitable for creating new designs of self-disinfecting plastic matrices. 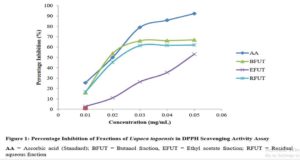 Malaria is one of the most lethal tropical diseases in Africa affecting millions of people yearly. Malaria is associated with oxidative stress which has been implicated in malaria-induced anemia and other pathological changes in the body. This present study investigated the antioxidant activity of the ethyl acetate, butanol and residual aqueous fractions of Uapaca togoensis stem bark in Plasmodium berghei infected mice. Phytochemical screening and acute toxicity studies of the fractions of Uapaca togoensis stem bark was carried out using standard protocols. Effect of fractions on free radical scavenging activity and oxidative stress induced by Plasmodium berghei infection in the plasma of parasitized animals was also investigated. Flavonoids, triterpenes, glycosides, alkaloids and tannins were found present in all the fractions. Oral median lethal dose of the fractions was estimated to be greater than 5000 mg/kg. For the DPPH radical scavenging assay, IC50 values obtained were 0.04 mg/mL, 0.313 mg/mL, 0.58 mg/mL and 2.30 mg/mL for ethyl acetate, butanol, residual aqueous fractions and vitamin C respectively.  At doses of 250, 500 and 1000 mg/kg, the butanol and residual aqueous fractions significantly reversed the effects of the oxidative stress. This was shown by the significant (p<0.05) reduction in MDA levels with a corresponding elevation in SOD, GSH and CAT levels. The findings from this study suggests that the antioxidant effects of the fractions might be an added advantage to it antimalarial activity.