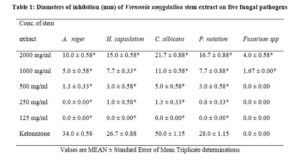 This study investigated the antifungal properties of the extract of Vernonia amygdalina stem and its effect on the electrolyte status of normal and Monosodium Glutamate (MSG) intoxicated rats. In vitro antifungal property of the extract was tested. The serum electrolytes statuses of treated and non-treated MSG-intoxicated rats were evaluated. The results indicated the susceptibility of all the fungi used to the ethanol extract of Vernonia amygdalina stem. Extract inhibition of Fusarium spp showed a higher significant (*p <0.05) zone of inhibition compared to ketoconazone. Serum chemistry showed that there was no significant difference (*p < 0.05) in the serum levels of bicarbonate, calcium and sodium at all doses tested. There was significant (*p < 0.05) increase in the serum potassium level at 400 mg/kg b.w. of the extract compared to the control. Significantly (*p < 0.05) raised sodium and calcium levels were observed in animals treated with 200mg/kg body weight. However, the elevated values were brought close to those of control at the dose of 400 mg/kg b.w. The studied extract exhibited considerable antifungal activity even against Fusarium spp. which the standard drug had no activity against. It was also found out that the administration of ethanol extract of Vernonia amygdalina stem did not alter the levels of serum electrolyte. 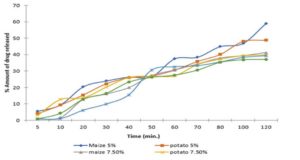 Starch is widely used in the pharmaceutical industry as binders, disintegrants and as diluents because it is readily available, inert, and cheap. Starch was extracted by conventional method from sweet potatoes (Ipomoea batatas) which are commonly grown in developing countries including Nigeria. The extracted starch was evaluated for its properties such as amylose/amylopectin content, pH, moisture content, loss on drying, micrometrics, and compression behavior using Kawakita and Ludde model. The starch was also evaluated for its binding effect in ethambutol tablet formulations and compared with equivalent concentration of standard maize starch as a binder in ethambutol tablet formulations. The sweet potato starch was found to have amylose content of 24.4 %, 7.8 % loss on drying and of poor flowability as indicated by Hausner’s quotient, Carr’s compressibility index and the angle of repose. The granules of ethambutol prepared by wet granulation method using the sweet potato starch compared favourably with those prepared with the standard maize starch in their micrometric properties such as Hausner’s quotient, Carr’s compressibility index, bulk and tapped densities and angle of repose. Tablets containing potato starch as binder had faster disintegration time, higher friability than those containing equivalent amount of maize starch. However, there was no significant difference in the amount drug released in the tablets prepared with sweet potato starch and those prepared with maize starch at 5%, 7.5% and 10 % binder concentrations (p < 0.05). Starch from sweet potato can therefore serve as cheaper alternative to the imported maize starch B.P.